The 2000 Millennium was acquired by Weekend Rides damaged very easy on its left front.  It was repaired to our demanding standards and refinished to it’s correct unique color.

Exterior features include chrome 18″ turbo-twist wheels and tailpipes, a polished 911 logo, and a rear wiper

With its gorgeous and unique to the millennium editions, the interior has the correct Millennium mahogany accents, six speed transmission, and numbered plate.  It runs and drives and had been repaired on the Celette by Damon of Series 900 for us. The Millennium has a LN Engineering record of its updated IMS.

The Type 996 introduced in 1998 represented two major changes for the venerable 911 lineage: a water-cooled flat-6 engine replaced the popular air-cooled engine used in the 911 for 34 years, and the body shell received its first major re-design. Changing to a water-cooled engine was controversial with Porsche traditionalists, who noted this as the end of the ‘true’ 911.

The 996 styling shared its front end with Porsche’s mid engined Boxster. Pinky Lai’s work on the exterior won international design awards between 1997 and 2003.

The Carrera variant had a 0.30 coefficient of drag. The interior was criticized for its plainness and its lack of relationship to prior 911 interiors, although this came largely from owners of older 911s. 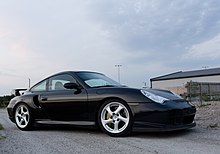 The Type 996 spawned over a dozen variations, including an all-wheel-drive Carrera 4 and Carrera 4S (the latter which had a ‘Turbo look’) models, the club racing-oriented GT3and GT3 RS instead of a Carrera RS variant and the forced-induction 996 Turbo and GT2. The Turbo, which was four-wheel-drive and twin-turbocharged, often made appearances in magazines’ lists of the best cars on sale.

The Carrera and Carrera 4 underwent revisions for model year 2002, receiving clear lens front and rear indicator lights which were first seen on the Turbo version two years earlier. This allowed the 911 to be more distinguishable from the Boxster. A mildly revised front fascia was also introduced, though the basic architecture remained.

The folding roof mechanism on the convertible variants required 19 seconds for operation. An electronically adjustable rear spoiler was installed that raised at speeds over 120 km/h (75 mph). It could also be raised manually by means of an electric switch.

Porsche released a road legal GT3 version of the 996 series which was derived from the company’s racing car used in the GT3 class racing. Simply called GT3, the car featured lightweight materials including thinner windows and deletion of the rear seats. The GT3 was a lighter and more focused design with the emphasis on handling and performance, a concept that dates back to the 1973 Carrera RS. The suspension ride height was lowered and tuned for responsiveness over compliance and comfort. These revisions improved handling and steering. Of more significance was the engine used in the GT3. Instead of using a version of the water-cooled units found in other 996s, the naturally aspirated engine was derived from the Porsche 911 GT1 ’98 sports-prototype racing car and featured lightweight materials which enabled the engine to have higher rpm.

The styling was more individual than the previous generations of the Turbo. Along with the traditional wider rear wing, the 996 Turbo had different front lights and bumpers when compared to the Carrera and Carrera 4. The rear bumper had air vents reminiscent of those on the Porsche 959 and there were large vents on the front bumper.

At Weekend Rides we always have Porsche projects and can fulfill almost any used 911 parts needs from our massive inventory of exclusively 911 parts at 570.503.1700 or inquire by email to parts@weekendrides.com

Call Rick Bolus at Weekend Rides to discuss your next Porsche at 570.503.170 or by email to: rick@weekendrides.com

For over 30 years, Weekend Rides LLC. has always strived to provide the highest level of service, honesty and integrity. It is our promise to exceed the expectations of our clients by utilizing the combined knowledge and experience of our dedicated staff to meet your automotive needs on every level including purchase, sales, or representation by providing exceptional quality, integrity and professionalism in all of our business transactions.

Weekend Rides has provided used Porsche parts to 911 enthusiasts for over 30 years. We offer quality parts for Porsche 911, Porsche 964 and Porsche 993. Our location is close to interstate highways and convenient to International ports. Weekend Rides sells used Porsche engines, transmissions, interiors and more.